A little bit of US History in Pictures from the 1800's

Borax and the 20 mule team 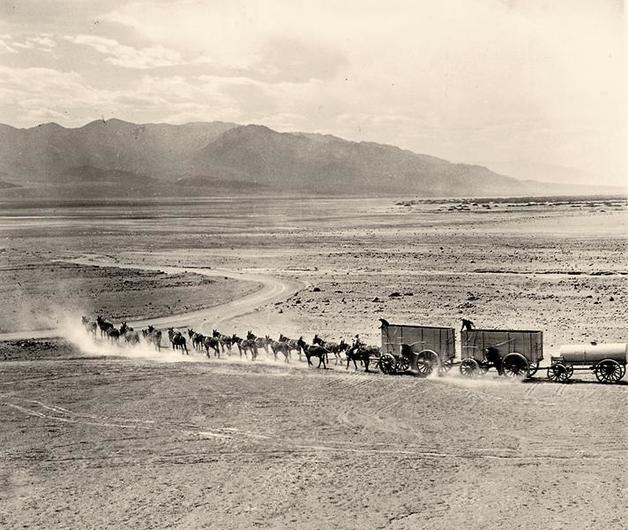 Death Valley, so appropriately named, is home to the lowest area in the western hemisphere, at 282 feet below sea level. One of the hottest places on Earth, the grounds are known to churn up a temperature of 190 degrees. Investors with 20 mule teams traveled to the sparse area looking to cash in on borax, a mineral known to exist in areas of Death Valley.

Couple during the frontier having lunch 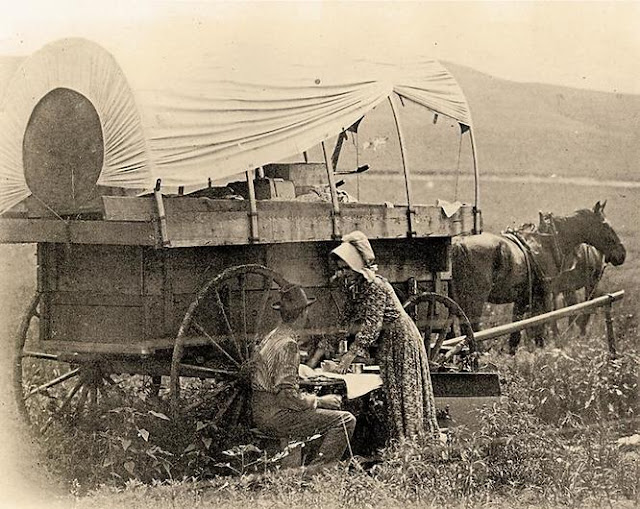 An emigrant is one who leaves one country for another to start a new life. This photo shows an emigrant couple from Kansas enjoying their lunch by their covered wagon and horses. This must be the 1800's equivalent of the new age tiny house!
Pearl Hart 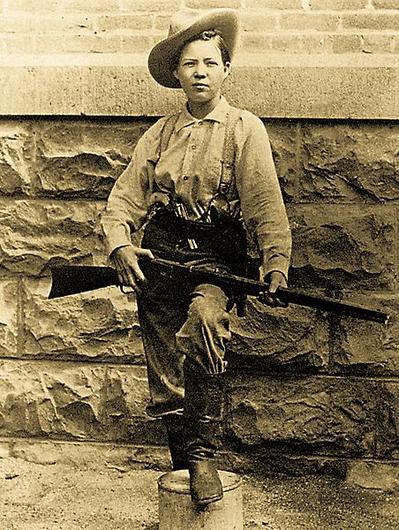 Pearl Hart gained a ton of attention for being a female outlaw, and dressing as a male, mostly. When she was jailed for robbing a stagecoach and getting caught on the run while sleeping, she made the most of her situation. Pearl was given better prison quarters as well as a lot of attention by the media, fellow inmates and jailers. Hart was eventually released for unknown reasons.
Rose Dunn 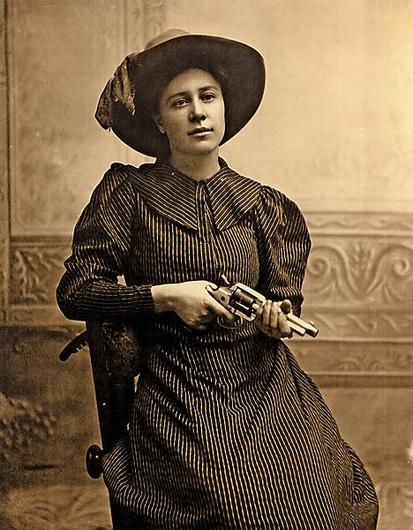 Rose Dunn was the sibling of two older brothers. In the early years, her brothers became wrapped up in a gang while Rose was around, and she had eyes for one of the guys, George Newcomb. During her relationship with Newcomb, her brothers became law abiding bounty hunters. After a shootout, many say Rose jumped in to help Newcomb escape by firing live rounds. Newcomb was eventually ambushed and Rose Dunn is known as the girl of an outlaw.
Sierra Nevada mountain trail 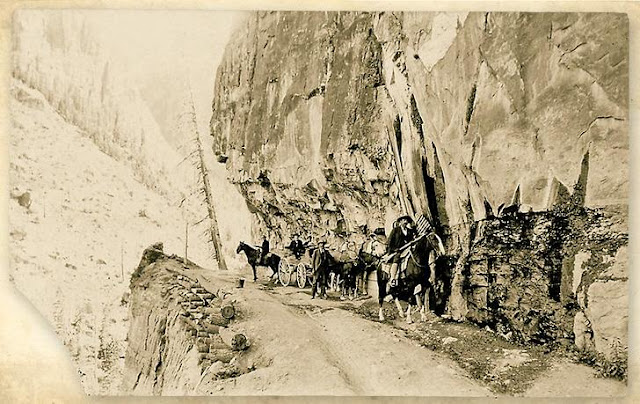 Locked up in the Sierra Nevada Mountains, this crew is on the go. Because transportation by prominent fellows through rough terrain was risky business in some circumstances, hired hands were available to secure the travel from A to B.
Tibercio Vasquez 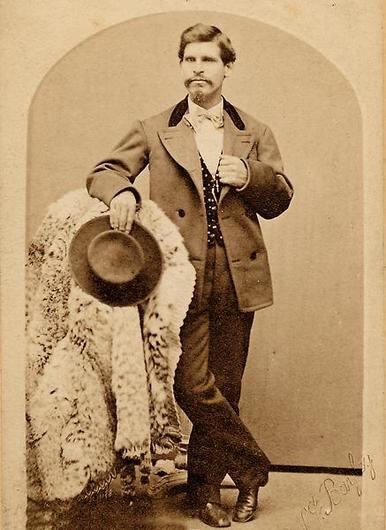 Tibercio was a hispanic outlaw, successful in fleeing through a 20 year crime spree. He was eventually captured and hung in 1875.
Wyatt Earp, sitting, with his friend, Bat Masterson 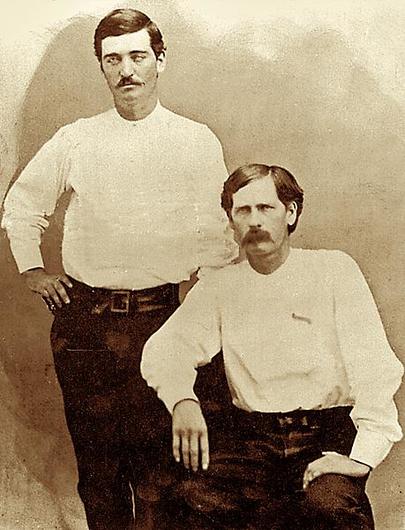 Wyatt Earp is a legend of the Wild West, notable so for his sory in the movie, Tombstone. After moving out west to California, Earp became a US Deputy Marshal in order to avenge his brother's murder. Wyatt had many occupations during his long life, such as a saloon owner, farmer and even boxing referee. Earp had three wives, the last for almost 50 years.
Olive Oatman 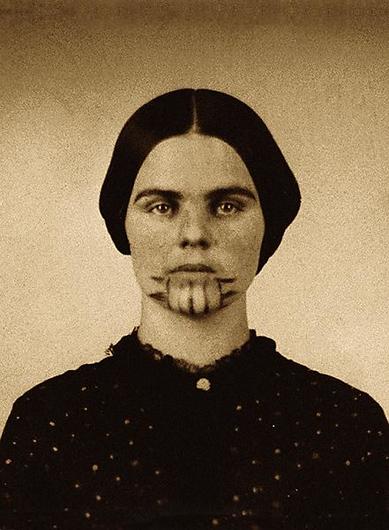 When Olive was just 14, her family was murdered by Indians. Olive and her sister, the only survivors, became slaves and were sold to the Mohave tribe. After her sister died from starvation, Olive somehow left the Indian tribe. She was left to go on from the experience with just a story to tell and a facial tattoo given to her by the tribe.
The Paiute Tribe 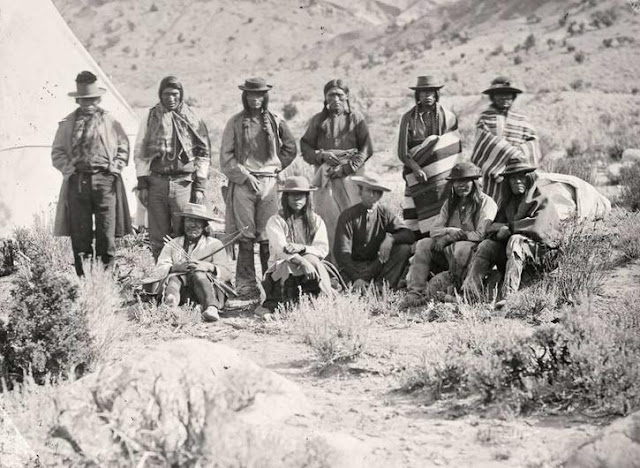 The Great Basin is known as the area around southeast Oregon, eastern California, and western Nevada. The tribes of Paiute Indians lived here. Many were separated into different tribes and spoke other languages. The Indians who were closest in language and culture were considered part of the band, while others with the same genealogy but different cultural-wise were not. After running them around, they finally gained their rights to reservation land.
Canyon de Chelly 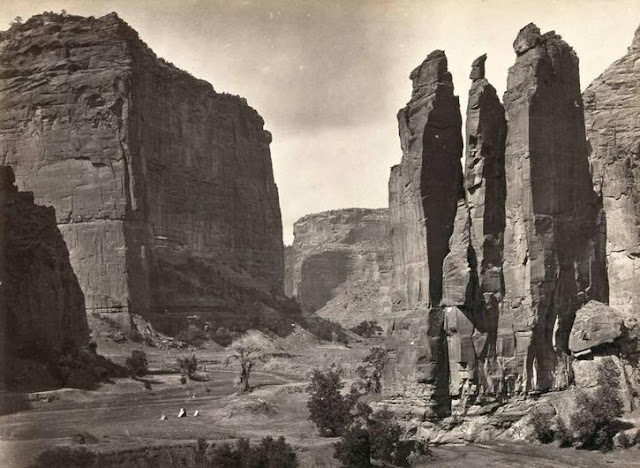 Among the mountains of the west lies the Canyon de Chelly National Monument in Colorado. This photograph was taken by Timothy O' Sullivan, a prominent photographer in the late 1800's. Today, this area is still a part of the Navajo Indian tribes. While people can go hiking and on tours, Navajo people still live there, as they have for thousands of years.
Buffalo Soldier 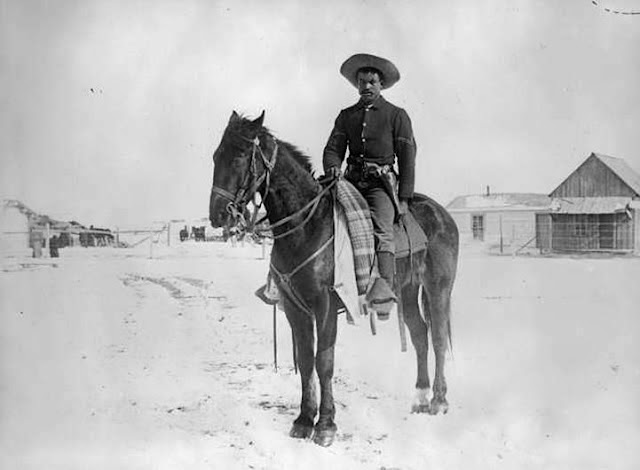 Black Americans who were a part of the US Army were given the nickname, Buffalo Soldier by Indians in 1866. This became a staple in American history. The oldest living Buffalo Soldier passed in 2005 at the age of 111.
Indian Teepees 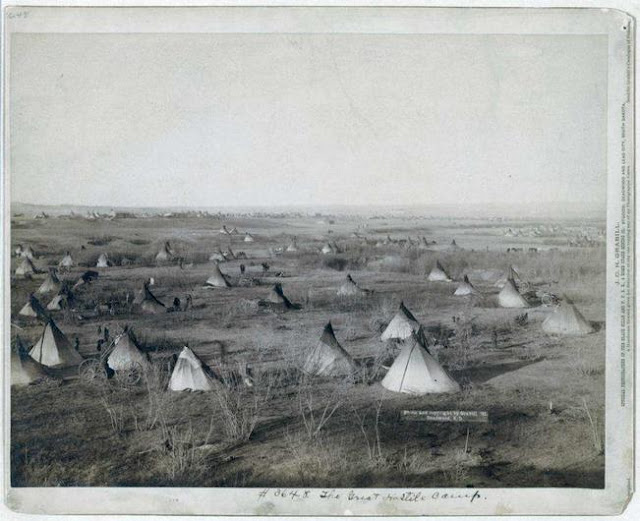 As time went on with the settling of the West, Indians were further put out. They were made to live on Reservations while the settlers inhabited the remainder of the land. They were given a monthly payment which the Indians often had to turn round and spend back to the settlers for goods. This practice is still going on today.
Indian overlooking the Transcontinental Railroad 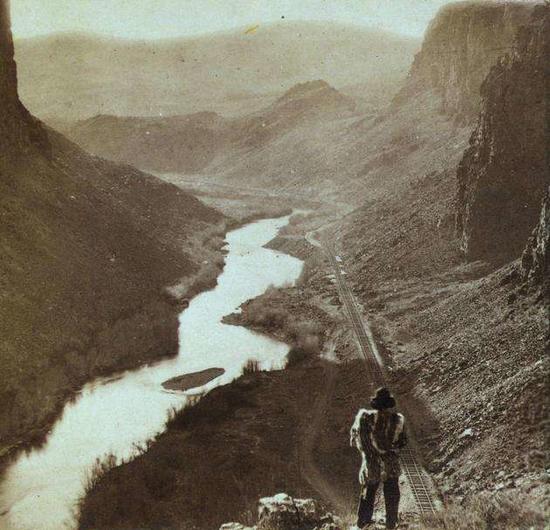 The Pacific Railroad, also known as the First Transcontinental Railroad, was built in order to connect the west to the east. Between 1863 and 1869, the railroad was built from San Francisco to the existing railroad in Iowa. The completion of the railroad revolutionized transportation, trade and settlement to the West.
Custer's black hills expedition, 1874 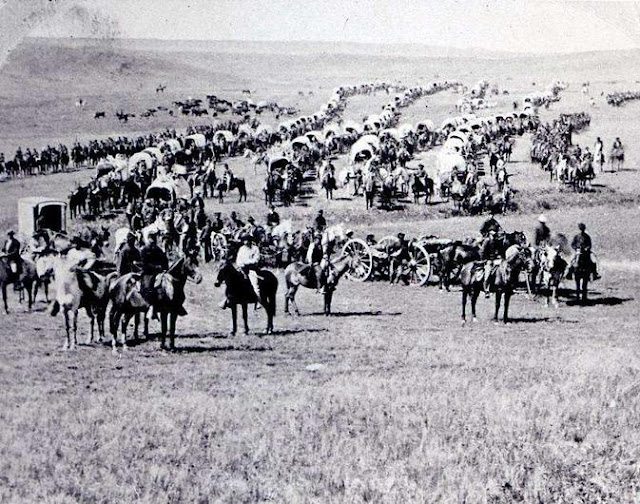 Lieutenant Colonel George Custer and his crew left from North Dakota to search for a route to the southwest and find gold. They also wanted to find a spot to make a fort in the Black Hills of South Dakota.
Chinese workers building the Great Northern Railway 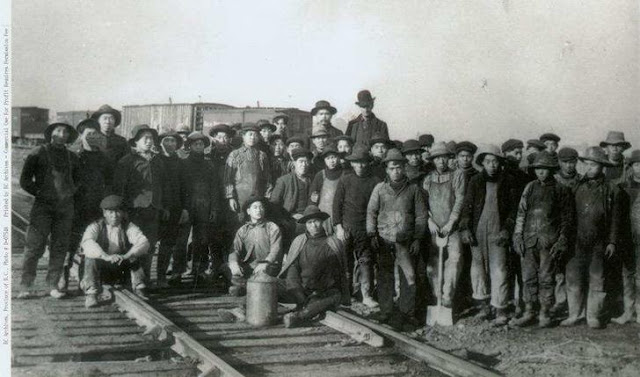 Chinese workers came to work on the Great Northern railway. While the white workers made $1.50 to $2.50 per day and had meals included, the Chinese workers were paid a dollar per day and still had to buy their own food and set and transport their own camps, even in terrible weather. Many became sick and injured, and probably really sad.
Pahranagat Mining District in Nevada 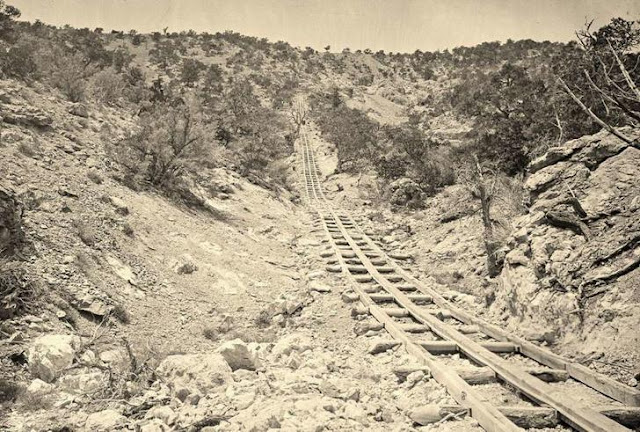 This is another photograph from Timothy O'Sullivan, famous for documenting the life and settlement of the frontier in the late 1800's. Gold mining was big business, and that meant a lot of effort went into doing it better. An ore car would be operated by a pulley, at this Illinois mine, connected to the tracks to aide in mining.
Navajo family 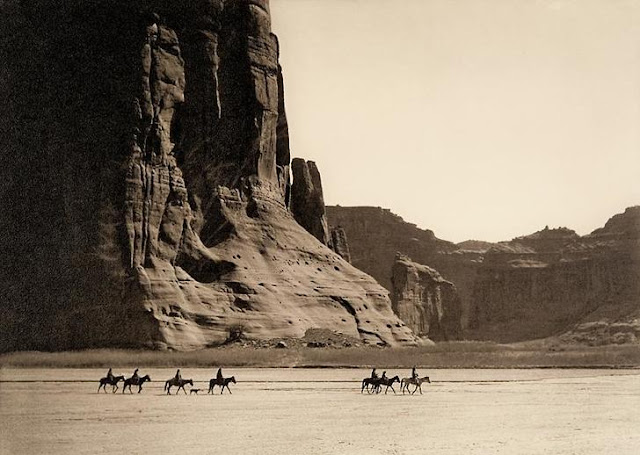 This famous photograph depicts Navajo Indians on their horses at the turn of the century. The picture was taken by Edward Curtis at Canyon de Chelly.
Charles Siringo and W.O. Sayles 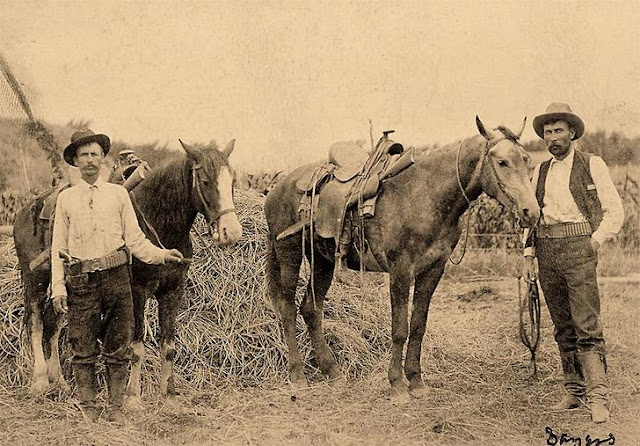 Charlie Siringo is best known for writing the book, "A Cowboy Detective," about his experiences as a detective at the famous Pinkerton Detective Agency. Siringo would travel all over the US as an undercover agent in order to gain intelligence, solve crimes and capture gang members. After leaving the agency, Pinkerton kept going out of their way to stop the publishing of his books. Oftentimes, Siringo would change the names and places of the stories he wrote to satisfy the detective agency and protect the identity of others in his stories.
William Anderson aka Bloody Bill, 1864 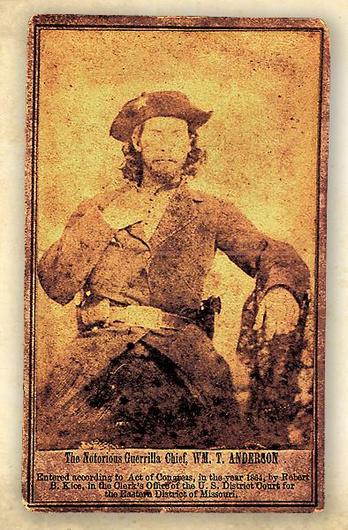 In William Anderson's short 24 years of life, he managed to get a name for himself. A southern guerrilla with a revenge out for union workers, William got the nickname Bloody Bill. After becoming the leader in his gang, Quantrill's Raiders, he set out to wreak havoc on the union. One would guess his rage was due to a judge killing his father at a young age, and then his sister was killed while in custody by the union. His best remembered rampage was when he took over a train and killed over 20 union members, then went on a tirade and killed 100 more. He was soon killed a year after. The carte de visite was made after finding this photograph on his dead body.