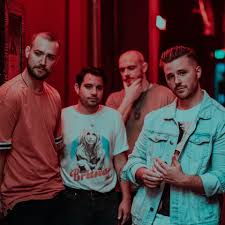 Alternative Band Northern National released their debut EP, The New Age, in the fall of 2016 and have never looked back. The Dallas, TX-based 4 piece has toured with acts such as Blue October, The Unlikely Candidates and The Band Camino and shared the stage with more. The New Age features 5 indie-rock gems, including their debut single, Love is Fire and their heartfelt love song Dallas which caught the attention of Spotify.

Love is Fire was featured on Spotify's Discover Weekly playlist and charted on Spotify's Viral 50 worldwide. Music curators such as Topsify, Filtr, and even Coca-Cola, have also featured the song on their playlists. Since the release of The New Age, Northern National's songs have been streamed over 1.8 million times and counting. You might have even heard them while watching TBS or MTV.

Fresh off of their tour with Blue October, Northern National partnered with producer Dwight Baker (Missio) in Austin, TX. Together they crafted their second EP titled D.A.R.K. which released in June of 2018.