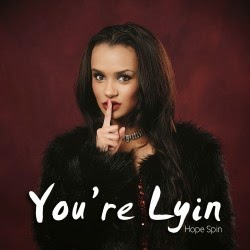 Every now and then, an artist emerges like a beacon of light, proudly proclaiming its uniqueness and its potential for sparking a musical revolution with songs that are pleasing to the ears of today's Hip Hop/Pop generation of fans everywhere.

Hope Spin is such an artist. She also expresses herself on stage with raw energetic performances that will wet your appetite for more.

This passionate teen recording artist has a unique style that is sure to appease any music lover that hungers for something new in the Hip-Hop & Pop music arena.

Hailing from and born in Las Vegas, Nevada -USA; Hope, a singer, rapper and dancer was born on the 14th of November. Hope, aka: Hope Spin has been honored with various awards of recognition from within the independent music industry over the past four (4) years.
AWARDS

Hope Spin began singing at the early age and thereafter, started rapping. Her single and video titled "Feel The Beat" was released in 2013. Her video "CAME TO PARTY" was released in Mid April of 2014.
Her newest single "Your Lyin" released in April 2015.

Hope is presently in the studio working on her next songs for her upcoming 2015 EP release.
Posted by Kenneth Howard Smith at 12:56 PM