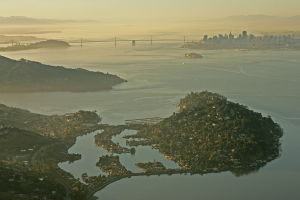 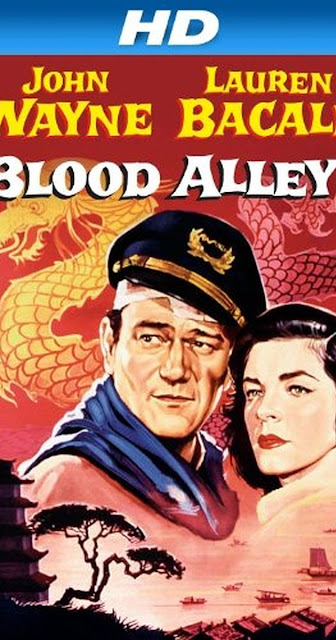 Phantoming the wood-burning sternwheeler riverboat from the 1955 movie "Blood Alley" starring John Wayne now floating on the Sacramento River about 15 miles north of downtown on the east bank from Brad's Baja Hammer 12.14.2013! It is slated to be restored and turned into a John Wayne floating museum! I have many pictures from all over the boat on all decks from 2 years ago before it was "rescued" from sinking.

Plot Summary
Wilder(John Wayne), an adventurous merchant marine captain, who knows every current,
port and prevailing wind in the far east, is approached by oppressed villagers
,to lead them to the saftey of Hong Kong.

Trivia
Robert Mitchum was originally cast as Capt. Wilder. He was fired from the film after an altercation in which he shoved the film's transportation manager into San Francisco Bay. Gregory Peck subsequently turned down the role of Capt. Wilder, and Humphrey Bogart wanted a $500,000 salary, which would have put the film over budget. Without a major male star involved, Warner Bros. contacted producer John Wayne, threatening to pull out of their distribution deal for the film unless he took the role himself. To keep his new production company Batjac afloat, Wayne agreed to play Capt. Wilder.

John Wayne appeared in an episode of "I Love Lucy" (1951) to promote this film.

There was some surprise when Lauren Bacall agreed to make the movie since she was a left-wing Democrat and the film was right-wing propaganda.

Goofs
* Revealing mistakes: When Captain Wilder leans against the window, the wall moves.

* Continuity: Bacall tells Wayne that the map he had been making was burned in the kitchen because there was no time to hide it before the troops arrived. A short time later, Wayne is seen writing on the same map (note the human anatomy on the front side of it).

* Continuity: When Wilder says "Half the Red navy's out there ...", the position of the wheel and the placement of his hands on it changes between shots.

* Revealing mistakes: In three scenes with Captain Wilder and Big Han are talking, the sampan is not moving. The trees reflected in the water behind the sampan are the give away.

* Revealing mistakes: Two scenes were definitely "low budget" and were obviously scale mockups that weren't believable: 1. When the wood goes through the paddle, this is obviously a 2x4 going through a small model. 2. As the paddleboat comes into Hong Kong, it is clearly models and a fake city.

* Revealing mistakes: When the ferry pulls into Hong Kong, they encounter a Royal Navy vessel with close-ups of the sailors. Ordinarily, British sailors wear a tally on their caps with the name of their ship printed on it. However, the sailors' tallies only have "HMS" on them and no ship's name.

The film was written by Albert Sidney Fleischman from his novel,
directed by William Wellman and was produced by Wayne's Batjac Productions.
Location filming took place in and near China Camp, a shrimp fishing village in the San Francisco Bay.

The real Blood Alley was located in Shanghai where Fleischman had visited as a sailor
on the USS Albert T. Harris (DE-447).
He was paid $5000 for the rights for his novel and allowed to do the screenplay.

Wayne plays a Merchant Marine captain in a role originally intended for Robert Mitchum
prior to an altercation with the producers.
Mitchum was fired from the production by Wellman.
Wayne took over the lead after Gregory Peck turned the film down
and Humphrey Bogart requested a large amount of money to assume the role.

Well, Well, what does everyone think of Duke and this film??
It is of course commonly known that, Humphrey Bogart, was Dukes choice for this film,
but when his price was too high, he signed Robert Mitchum,
ironically casting, Bogie's wife Lauren Bacall, to play opposite him!!
I think Mitchum, would probably, have been more suited to the role of Wilder.

However Big Mitch fell out with Director Wellman.
and Duke had to step in, to save the film!
This being Batjac's first venture.

Personally, although I enjoyed the film, I don't think Duke seemed right in the part,
and I think from the looks of it, he probably felt the same!!
Critics, found the film, slow moving, and that Duke, hadn't added perceptibly, to his acting range!
Although not a box office smash, it did well enough to more than recover Batjacs costs!!

Barrelling Down Blood Alley With The Duke At The Helm!
23 March 2006 | by gary-peterson (Omaha, Nebraska)

I was sparked to comment after reading another user comment here that contended Blood Alley is one of John Wayne's worst films. It may not be at the top of the heap, but it's far from the bottom. It well accomplishes what it sets out to do--entertain: fun, engrossing, action-packed and--on the wide-screen edition DVD I have--beautiful to behold.

The reviewer especially criticized Wayne's frequent side comments to "Baby" and the film's having non-Orientals playing the Chinese. I didn't find either factor a deterrent to my enjoyment. First, I took Baby to be Wayne's guardian angel more than an imaginary girlfriend. And I think his occasional comment to her was fitting. Yeah, the Captain Wilder got a little dotty after spending all those years alone in that cell. His hangup about "tennis shoes" was another example of his having gone a bit stir crazy.

Having non-Orientals play Chinese or Japanese was not uncommon in the Hollywood of yesteryear. Remember Charlie Chan and Mr. Moto? And closer to our time David Carradine in Kung Fu. I never understood why this is a stumbling-block for some people. And in Blood Alley the American actors playing Chinese did a great job.

Paul Fix first and foremost gets a nod. He made Mr. Tso a distinct character through mannerisms and distinctive sage-like speech. I especially liked the scene where Captain Wilder told him to toss that ornate sculpture in the furnace to fuel the ship, "That'll burn" Duke says, but Fix calmly notes how a craftsman put 10 years of his life into creating it. Here was a man who respected and had appreciation for the intangible things, like beauty and like freedom, which is what Mr. Tso was risking his life to help his townspeople regain.

Mike Mazurki also gets kudos for putting in a great performance as Big Hans. No, he didn't really look Oriental, but he brought weight to his part, especially in his first scene. You could tell that he was a guy you could count on. And for film buffs familiar with Mazurki, wasn't it nice to see him playing a good guy for a change?

Finally, the reviewer said Lauren Bacall was wooden. Well, was she ever among Hollywood's most dynamic actresses? I thought she did a good job with what she had to work with. She did seem tacked onto the film and her story was secondary to the main plot. I never did get a firm grasp on the subplot involving her father or why she ran off in the ship graveyard. However, she did sizzle in the scenes in the pilot house, especially when coming between Wilder and the ship's wheel. Yes, this film was not her finest hour, but Bacall certainly redeemed herself in The Shootist and proved she did indeed have an on-screen chemistry with Wayne.

Admittedly Blood Alley does not have a place in the crowded pantheon of GREAT John Wayne films, but it is certainly not among his worst! And as a huge fan of the Duke I can't even suggest a film for that dishonor. For me, any film featuring John Wayne is going to be better than most anything else on at the same time
DukePilgrim
Ive always thought Blood Alley was okay. There is enough to keep the viewer interested but as you say the role was written for Mitchum or Bogart in mind and it shows. John Wayne liked working with Lauren Bacall and her strong role helped the movie.
ethanedwards
Thought it might help if I transfered these earlier comments, to the new forum
Dec 11 2005, 10:38 AM
Hi,
AISSA WAYNE in her book JOHN WAYNE- My Father
Says that Pilar was so annoyed with Mitchum, for falling out with Wellman!!
Because of this, it meant Duke was to be away, filming, again, when she didn't expect him to be!
When later, the Mitchums, were house guests, she was less than friendly.
Duke was wary of his new wifes toughness,

"It was one of the reasons, my father adored her"

In his book Them Ornery Mitchum Boys John Mitchum states that the incident with his brother Robert when he threw the transport manager into San Francisco Bay was contrived. He argues that John Wayne owed Warners a picture and by getting Mitchum fired they could then get Wayne to star.
Posted by Kenneth Howard Smith at 9:54 AM