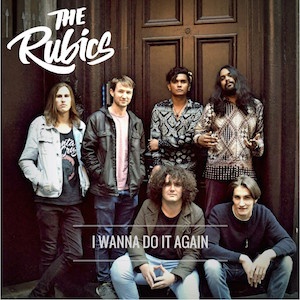 2017 has been a great year so far winning the New Zealand, Battle of the Bands National Championship. The band was born in 2012 when lead singer Rob Walkman connected with then guitarist turned keyboardist Jason Bell.

Rhythm guitarist Leo Nemkin was thrown into the mix at the end of 2015 in a line up reshuffle that would see Bell trade the guitar for the keyboard.

The Rubics entered the national Battle of the Bands competition in both 2014 and 2016. In the second edition they were crowned champions.

To celebrate, they officially released their debut EP ‘Blasphemy’ in August to an overwhelmingly positive reception from their fans. 2016 continued to be a very busy year for the band as they embarked on a European tour through the months of September and October.

After playing a successful string of shows across Spain, France, Germany, Hungary, The Czech Republic and Holland, The Rubics returned home to record their new single “I Wanna Do It Again” at Roundhead Studios – Auckland’s premier recording studio.

The Rubics took some time away from the stage during the mixing and mastering process of their newly recorded single, before returning with a bang for their sold out single release show for “I Wanna Do It Again” in early 2017.

The Rubics are planning to release their debut LP in 2018.
Posted by Kenneth Howard Smith at 8:20 PM